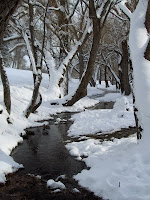 Now that Lines of Flight has been released, I have begun work on my second collection, tentatively entitled Winterbourne.  So far, I have around 40 pages of poetry, including my sonnet sequence "Seven Deadly Sonnets".

I'm thinking about including five or six of my English translations of French-Canadian poets (Nelligan, Dantin, Fréchette, Lozeau, LeMay) but at the same time feel this might put off US publishers. Maybe two MS versions, one for Canadian submissions, another for US, UK and Australian.

At the same time, I'm beginning some research on María Eugenia Vaz Ferreira, one of the best Uruguayan poets of the early 20th century whose work is virtually unknown in the English-speaking world (and also to a large extent, the Latin American world) due to the erasure and trivialization of her (and other Latin American "poetesses") work.

I am rereading her complete works and have found two valuable sources of information on the context of erasure and some insights into her life, but hope to be able to dig up more.

Though this blog is called The Wonderful Boat in honor of Delmira Agustini, another Uruguayan poet, it was Vaz Ferreira who paved the way for Agustini and also Ibarbourou. Had it not been for Vaz Ferreira's famous brother keeping her poetry unpublished until 30 years after her death, she would not be absent from anthologies of Latin American writers, one of which has even now just hit the library shelves!

Project for today: a villanelle and/or an ovillejo.