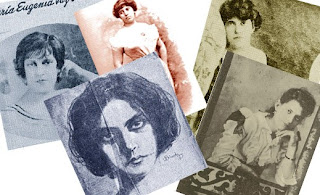 I'm thrilled to announce that I will be presenting Uruguayan poet María Eugenia Vaz Ferreira at the 2012 West Chester Poetry Conference Mezzo Cammin Women Poets Timeline Project panel in June 2012.
Vaz Ferreira, a metaphysical poet celebrated during her lifetime and then relatively "forgotten" after her death in 1924, was the precursor to four Southern Cone poetisas, Uruguayans Delmira Agustini and Juana de Ibarbourou, as well as Chilean Gabriela Mistral and Swiss-born Argentine Alfonsina Storni. I will examine the reasons for this silence, which lasted thirty-five years; the efforts that have been made since that time to bring to light her complete oeuvre; and make a close reading of one of her sonnets, "La estrella misteriosa" (which I will render in Spanish as well as my English translation).
I'm leaving for Uruguay tomorrow to try to tie up some "loose ends" to my investigation.
¡ Hasta luego !
Posted by Catherine Chandler at 12/08/2011 09:58:00 PM