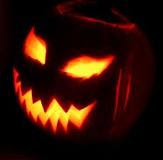 
A poem for Chola here

Thank you for over fourteen years of love, loyalty, companionship and happy memories.


A brief entry to report that two of my poems, "Upheavals" and "The End" are now online at the Salamander Cove poetry blog .

The poems are permission-secured and were chosen on an invitational basis.  I'm thrilled to have my work appear alongside poetry by Allison Joseph, Kurt Brown, Ruth Bavetta, James Tate and Lorna Crozier.

Able Muse Press Editor, Alex Pepple, has just let me know that Richard Wakefield's review of my poetry collection, Lines of Flight (Able Muse Press, 2011), will be published in the New York Quarterly in November.

In October of 2003, after I had returned to writing poetry after a hiatus of several decades, that is, when I decided to be faithful to my true vocation, I rather brazenly sent a letter to US Poet Laureate and my favorite poet, Richard Wilbur, along with twenty-one poems, asking if he wouldn't mind letting me know if my poetry "is any good".

Two weeks later, Mr. Wilbur wrote back to me: "Well, it seems to me that your poems are very good indeed; formally accomplished, well-paced, witty, and full of the right words."

He went on to mention three of my sonnets in particular, as poetry of "a transcendent realm which reaches out of the mere everyday."

I've been blessed since then to have met, heard, and spoken briefly with Mr. Wilbur, both in Newburyport, Massachusetts at their annual literary festival and at West Chester University's poetry conference in 2011. He has subsequently written that my translation of Verlaine's Ars poetica is "excellent", and wrote an endorsement of my first full-length collection, Lines of Flight, for the book's back cover, the manuscript having been sent to him by Alex Pepple of Able Muse Press.

Since October is quickly coming to a close, I wanted to include Mr. Wilbur's extraordinary and unforgettable poem, "Elsewhere", in my poetry blog.

My letter to Mr. Wilbur, written nine years ago, ends by stating "Mr. Wilbur, poetry is the underpinning of my life. It sustains me. And I dearly want to share mine with the world, but have no idea of how to go about it . . . What I am trying to ask is that you kindly read over some of the poems I've included in this package (whenever you have the time and/or inclination), and then please let me know your opinion of them. For this I would be eternally grateful."

The delectable names of harsh places:
Cilicia Aspera, Estremadura.
In that smooth wave of cello-sound, Mojave,
We hear no ill of brittle parch and glare.

So late October’s pasture-fringe,
With aster-blur and ferns of toasted gold,
Invites to barrens where the crop to come
Is stone prized upward by the deepening freeze.

Speechless and cold the stars arise
On the small garden where we have dominion.
Yet in three tongues we speak of Taurus’ name,
And of Aldebaran and the Hyades,

Recalling what at best we know,
That there is beauty bleak and far from ours,
Great reaches where the Lord’s delighting mind,
Though not inhuman, ponders other things.


- Richard Wilbur (from his book Mayflies)

Two months to Christmas Eve! Hundreds of geese are now landing on the local sandpit pond here in Saint-Lazare, Quebec, stopping by on their way to warmer climes. Starlings have formed and gone weeks ago. Hopefully, I'll be following my feathered friends eleven weeks from now. 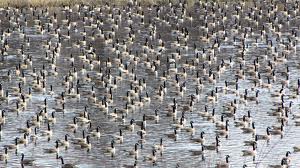 My poem, "Delineations", was first published in Able Muse Journal (Winter 2010) and is included in my collection, Lines of Flight.

Wild geese flee the coming cold and ice,
sketching the sky with epic Vs;
no roundabout for these –
their route precise.

Starlings in formation never jostle –
aggregates of living art,
together yet apart
in graceful rustle.

Patterns of exuberant design,
cadenza, cadence, wavelength, arrow,
slant or straight and narrow –
theirs, mine. 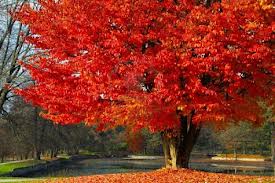 Great Globules—in the Alleys—
And Oh, the Shower of Stain—
When Winds—upset the Basin—
And spill the Scarlet Rain— 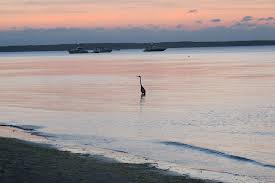 It was my thirtieth year to heaven
Woke to my hearing from harbour and neighbour wood
And the mussel pooled and the heron
Priested shore
The morning beckon
With water praying and call of seagull and rook
And the knock of sailing boats on the net webbed wall
Myself to set foot
That second
In the still sleeping town and set forth.

My birthday began with the water-
Birds and the birds of the winged trees flying my name
Above the farms and the white horses
And I rose
In rainy autumn
And walked abroad in a shower of all my days.
High tide and the heron dived when I took the road
Over the border
And the gates
Of the town closed as the town awoke.

A springful of larks in a rolling
Cloud and the roadside bushes brimming with whistling
Blackbirds and the sun of October
Summery
On the hill’s shoulder,
Here were fond climates and sweet singers suddenly
Come in the morning where I wandered and listened
To the rain wringing
Wind blow cold
In the wood faraway under me.

Pale rain over the dwindling harbour
And over the sea wet church the size of a snail
With its horns through mist and the castle
Brown as owls
But all the gardens
Of spring and summer were blooming in the tall tales
Beyond the border and under the lark full cloud.
There could I marvel
My birthday
Away but the weather turned around.

And the twice told fields of infancy
That his tears burned my cheeks and his heart moved in mine.
These were the woods the river and sea
Where a boy
In the listening
Summertime of the dead whispered the truth of his joy
To the trees and the stones and the fish in the tide.
And the mystery
Sang alive
Still in the water and singingbirds.

And there could I marvel my birthday
Away but the weather turned around. And the true
Joy of the long dead child sang burning
In the sun.
It was my thirtieth
Year to heaven stood there then in the summer noon
Though the town below lay leaved with October blood.
O may my heart’s truth
Still be sung
On this high hill in a year’s turning. 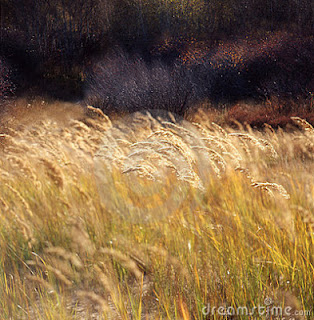 The field of cornflower yellow is a scarf at the neck of the copper sunburned woman, the mother of the year, the taker of seeds.

The northwest wind comes and the yellow is torn full of holes, new beautiful things come in the first spit of snow on the northwest wind, and the old things go, not one lasts.
Posted by Catherine Chandler at 10/10/2012 08:45:00 PM No comments: 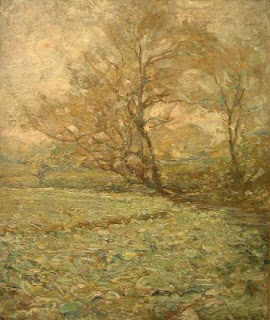 Especially when the October wind
by Dylan Thomas


Especially when the October wind
With frosty fingers punishes my hair,
Caught by the crabbing sun I walk on fire
And cast a shadow crab upon the land,
By the sea's side, hearing the noise of birds,
Hearing the raven cough in winter sticks,
My busy heart who shudders as she talks
Sheds the syllabic blood and drains her words.

Behind a post of ferns the wagging clock
Tells me the hour's word, the neural meaning
Flies on the shafted disk, declaims the morning
And tells the windy weather in the cock.
Some let me make you of the meadow's signs;
The signal grass that tells me all I know
Breaks with the wormy winter through the eye.
Some let me tell you of the raven's sins.

Especially when the October wind
(Some let me make you of autumnal spells,
The spider-tongued, and the loud hill of Wales)
With fists of turnips punishes the land,
Some let me make of you the heartless words.
The heart is drained that, spelling in the scurry
Of chemic blood, warned of the coming fury.
By the sea's side hear the dark-vowelled birds.

Bleak and remembered, patched with red . . .

What a wonderful way Millay uses the extended metaphor of an autumn daybreak to communicate the "dawning on" the writer of death consciousness, as autumn replaces the green summertime prime of life. The hill is, of course, a cemetery, and the patches of red are the flags placed on the graves of fallen soldiers on Memorial Day. 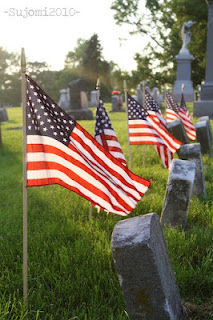 Cold wind of autumn, blowing loud
At dawn, a fortnight overdue,
Jostling the doors, and tearing through
My bedroom to rejoin the cloud,

I know — for I can hear the hiss
And scrape of leaves along the floor —
How many boughs, lashed bare by this,
Will rake the cluttered sky once more.

Tardy, and somewhat south of east,
The sun will rise at length, made known
More by the meagre light increased
Than by a disk in splendour shown;

When, having but to turn my head,
Through the stripped maple I shall see,
Bleak and remembered, patched with red,
The hill all summer hid from me.

I'll be posting some of my favorite Fall poems here on the blog this month. A little truth and beauty to soften the stings and arrows, if you will . . .

One of my favorites is, of course, "October" by Robert Frost. I memorized this memorable poem ages ago, and never tire of reciting it, sometimes even aloud while looking out into the woods behind my home. Notice the wonderful onomatopoeia in  the word "call" to describe the crows in line 5! 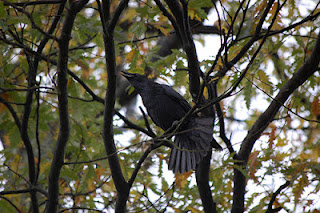 O hushed October morning mild,
Thy leaves have ripened to the fall;
To-morrow's wind, if it be wild,
Should waste them all.
The crows above the forest call;
To-morrow they may form and go.
O hushed October morning mild,
Begin the hours of this day slow,
Make the day seem to us less brief.
Hearts not averse to being beguiled,
Beguile us in the way you know;
Release one leaf at break of day;
At noon release another leaf;
One from our trees, one far away;
Retard the sun with gentle mist;
Enchant the land with amethyst.
Slow, slow!
For the grapes' sake, if they were all,
Whose leaves already are burnt with frost,
Whose clustered fruit must else be lost--
For the grapes' sake along the wall.