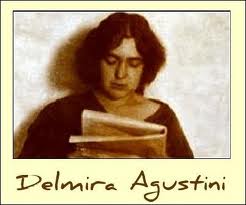 Uruguayan poet Delmira Agustini published her third and final book of poetry, Los cálices vacíos, one hundred years ago, in 1913. She had planned on two more books, but her ex-husband murdered her then committed suicide in 1914.

Last week I found one of the most complete works on Agustini's tragic life, Delmira Agustini, by Ofelia Machado de Benvenuto (1944), in one of the many musty bookstores in the feria Tristán Narvaja in Montevideo. Can't wait to read it.

This blog is named after her poem "La barca milagrosa", and I plan to translate some of her later work into English, that is, after I finish several more by the brilliant Uruguayan poet María Eugenia Vaz Ferreira.

Back in Punta, I was surprised to find two cross streets named Delmira Agustini and Cálices Vacíos.