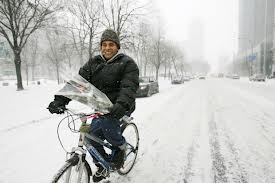 A Storm in April   (by Richard Wilbur)

Some winters, taking leave,
Deal us a last, hard blow,
Salting the ground like Carthage
Before they will go.

But the bright, milling snow
Which throngs the air today—
It is a way of leaving
So as to stay.

The light flakes do not weigh
The willows down, but sift
Through the white catkins, loose
As petal-drift

Or in an up-draft lift
And glitter at a height,
Dazzling as summer’s leaf-stir
Chinked with light.

This storm, if I am right,
Will not be wholly over
Till green fields, here and there,
Turn white with clover,
And through chill air the puffs of milkweed hover.

I’d seen a goldfinch, days were getting mild,
the crocuses were up, and I could hear
the wild geese honking on the pond. Beguiled,
I’d set the garden chairs in place in sheer
delight. The northern winter-spring transition
is never easy, but I’d hoped this year –
Alicia’s cancer gone into remission –
that April would be kind. Then we had snow
this afternoon, a boreal admonition:
Not so fast. Not so
fast.
Oh, to be the quiet sort
who bow their heads, accept the status quo,
conceding there’s a God and we’re his sport,
that winter is so long, and life so short!