"From the beautiful to the brittle": The Frangible Hour 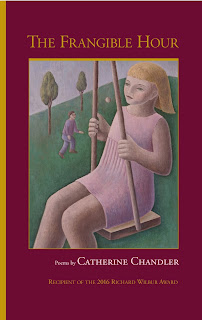 An excerpt from Rebekah Martindale’s review, “Inside the Garden Gate” for Think Journal.


Catherine Chandler’s The Frangible Hour captures moments in time from the beautiful to the brittle.

The book’s opening sonnet begins with a moment of intense personal experience, the instant when beauty is recognized as “an unendurable embrace.” Reminders of beauty’s fragility cover the temporal spectrum—Seconds: the moment of awe, Minutes: the fleeting “quiddity of daybreak,” Days: the “yellow-green” of the leaves, Weeks: the “garden plot of rhubarb and asparagus,” Months: the summer itself whose demise is imminent, Years: the child, who is transformed into adulthood as the poem proceeds. Then finally, Hours, in the closing couplet as the woman returns to the garden gate, “stockings wet with dew” and delays her housework for “an hour or two.”

Chandler evokes the Koine Greek pathos of beauty, hōraios, which associates beauty with “being of one’s hour,” which is not forever. References to time—hours, days, weeks, seasons—measure the poems in Part I and reappear frequently. Chandler also evokes the liturgical calendar as she moves through the “Lenten brume,” of “Wherein the Snow is Hid” to images of Easter morning in “Zeeman’s Paradox.” Her poem, “Chasubles,” links the liturgical with the temporal.

Roots suck down the spectrum’s red
to steel a brutal crust;
leaves must take what’s left of light—
epitome of trust.

Summer’s a smiling charlatan
camouflaged in green
where violet truths lie mantled in
the seen and unseen.

The seven elegies that make up Part II, subtitled “Days of Grass,” are reflections on Psalm 103:15-16: “As for man, his days are like grass, he flourishes like a flower of the field; the wind blows over it and it is gone, and its place remembers it no more.”

The first five poems are dedicated to specific people (and a dog). The last two poems, which are more general meditations on death are in lighter verse forms. These bouncy rhythms not only give the poems an eerie tinge, but also quicken the pace, creating a nice transition into Part III: from the poem “Heal-all”:

Bring me a barn loft of heal-all
and up with my heartbreak I’ll climb.
I won’t drink it or eat it
because, though I need it,
my wounds want the heal-all of time.

The humorous sonnet, “Olēka,” in which the narrator is confronted with the unused spices in her double-decker spice rack ends Part III on an ironic note: the awareness of how few days are memorable.

Part IV brings us moments of regret, recognition, and despair. Again, it is the reminder of hōraios that give the poems poignancy and cohesiveness. Both beauty and brittleness are captured in the slant rhyme Christmastime sonnet, “For Melina, 8, Sleeping.” Here it is the unsaid word lurking just below the surface that threatens the sleeping girl, but it also invites the reader to recognize the hōraios in her.

Soon enough some callous, hard-nosed kid
at school will razz you for your artless faith,
and blab the truth you sense behind the myth.
I wish you sugarplums, as my unsaid
revelation like an axiom,
swirls above the silence. Does no harm.

Part V, the final section of the book, consists of meditations on death and grief. The harrowing five-part poem “Almost” documents the near death of the author’s daughter. Now time is measured in novenas and decades counted on her comatose daughter’s hands. Chandler ends with an elegy to her father, closing her book with prayerful couplets. These final couplets rise up as concrete formations of a spiritual honesty that has infused the book all along:

A birth. A life. A death. A promise barely kept—
these tenuous words of denouement: a song of praise.

She deals in tar & tallow, turpentine & twine,
lifts one last chantey to the dawn—in song, she prays.