REVIEW: SCR on LINES OF FLIGHT 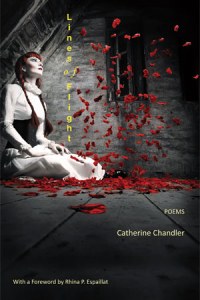 Catherine Chandler’s first collection, Lines of Flight, has a deceptively easy tone of voice that draws you quietly in, delivering seemingly smooth truths that are hard won. The poems look easily crafted, fitting together like marquetry pieces on an inlaid antique table, but each word, each phrase, has earned its place. In ‘Ushuaia’, for example — a poem about travelling to the far south of the world — the “wind and weather” of the southern hemisphere might be “a poet’s fodder, at the very least,” but it is the distance gained that allows the poet to view “a downhill town: / a bleak, forsaken prison, silent bogs” and compare it to her own lived experience to “show / that there is really nothing new, indeed, / under the sun, beyond the point of no / return.” Giving new life to a cliché, through the use of Chandler’s controlled forms, allows her to meditate on what she sees newly against the backdrop of her previous experience.

Experience is the one tool that the poet brings to the poetry table above all else. In many MFA programmes there are plenty of younger poets working at the craft of poetry, but it is life experience that the poet needs to draw from. Chandler draws on her own lived experience, particularly in poems that reflect nature, which she uses to contemplate and question human perceptions and abstractions. A lot of nature poems fail to do this making them a tad tedious, but Chandler avoids this trap making vivid concrete details stand for our preoccupations, as in ‘Lightning Bug’ where she wishes the bugs escaped from the jars that children capture them in: “Stolen beauty, steal away / in lines of flight!” This short poem catches the lean approach of the collection — a few skilful strokes and the image is caught, standing for more than the sum of its parts.

Chandler dips into this theme again in ‘Delineations’ where wild geese pattern the skies and the idea of pattern, whether in music, poetry or art, becomes an extended metaphor. She riffs off this idea as “Patterns of exuberant design, / cadenza, cadence, wavelength,” ending with “arrow,” pointing, perhaps, to the idea of the arrow of time, or entropy — that of the geese and that of the poet — as life moves forward through time. Regret could be interpreted here, but perhaps it is more the idea of nostalgia, as time can never be rewound only followed linearly.

Chandler writes deftly, and some of her word choices are imaginative in both sound and meaning, such as the pairing of “herbicide and sobriquet” in ‘Dandelion’, the defiant weed that ‘dances June away’ nodding back to Yeats, standing for ‘love’ but also open to ‘your /own green intoxications.’ This playfulness is also seen in poems like ‘Writ’, where Chandler is writing back to the famous ‘Look in thy heart and write’ quote from Sir Philip Sidney. ‘So I have seized / it tagged and bagged it’, showing Chandler’s mastery of form and facility with language in poems that burst through their craft.

True, the shoulders of giants can be seen peeking through this collection at times such as in ‘New Hampshire Interval’ — a poem about ‘visiting the Frost Place, at Franconia’ — but Chandler’s way is to take the rhythm of the words forward, allowing us to connect back with Robert Frost’s use of speech-word-rhythms (master of iambic springs!), and make it resound for the present: “He’d just returned from England, heartened, heady; / he thought he’d make a go of it — he’d farm / and write.” So much depends on the word ‘go’ in the second line which is so skilfully wrapped into the seemingly simple words and their rhythm that you’d almost miss it in reading.

Overall, Chandler would put you in mind of Frost the most: her collection has plenty of publishing credits showing the hard work put into writing, editing and re-working and she has taken her time working towards a fully-formed style in her first collection. Her work deserves the praise it has earned on its covers, in terms of her use of form and language. She crafts poems from which integral lines linger long after closing the book. I hope that her next collection is as carefully wrought.