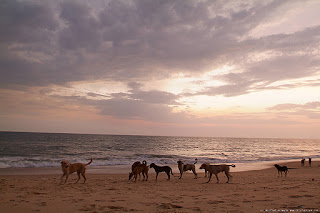 Beach Dogs
In memory of Alfonsina Storni
A man parades his paunch, and you can bet
his wife, though dripping gold, will not get wet.
His brother reads Clarín; his bored son pokes
a jellyfish; abuela smirks and smokes.

They seem to sense that I’m not one of them –
I’m much too serious, too plain. Ajém,
I hear them warn each other as I rise
to shift my chair. They weigh my gringa thighs.

What’s this I see? A scrawny mongrel winds
his way along the shore. At last he finds
a spot of shade. The worn-down, worn-out fella
drops down beneath the nearest beach umbrella.

Mine. My neighbors bray in disapproval,
insist upon the vagabond’s removal;
then take a different tack and whisper, Pleece . . .
mayvee he hab dee rrrrabies o dee fleece.

That well may be. For look, his skin is bruised
and scarred; he’s been excluded, bashed, abused.
I feed the dog some water and a crust
as the porteños gawk in dark disgust.

Before the Prefectura comes, we fly,
he to the sands of Mansa Beach; while I
cast off, adrift, unmoored from the décor,
will drown at sea and later wash ashore.
(Catherine Chandler, Punta del Este, Uruguay, January 2009)
Posted by Catherine Chandler at 12/01/2011 06:30:00 AM