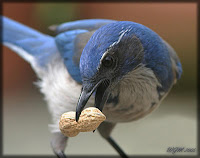 One of the wonderful poets I met at this year's West Chester University Poetry Conference was Timothy Steele, one of the three poets who encouraged my writing when I began to consider publishing back in 2004. I had sent him a few poems by email, and he graciously sent me his thoughts and suggestions on several of the poems. One he especially liked was "Spirit" and the other, "Wilkes-Barre". His poetry is brilliant, and his two books on meter, "Missing Measures" and "All the fun's in how you say a thing" are an invaluable source for formalist writers.
Thanks again, Mr. Steele!
Cathy
December in Los Angeles

The tulip bulbs rest darkly in the fridgeTo get the winter they can't get outside;The drought and warm winds alter and abridgeThe season till it almost seems denied.A bright road-running scrub jay plies his bill,While searching through the garden like a sleuthFor peanuts that he's buried in the soil:How different from the winters of my youth.Back in Vermont, we'd dress on furnace vents.A breakfast of hot cereal -- and thenWe'd forge out to a climate so intenseIt would have daunted Scott and Amundsen.I'd race down icy Howard Street to catchThe school bus and pursue it, as it roaredUp Union, my arms waving, pleading, muchTo the amusement of my friends on board.But here I look out on a garden, whosePoor flowers are knocked over on their side.Well, stakes and ties will cure them of the blues(If not the winds) and see them rectified.And in the shower is a pail we useTo catch and save the water while it warms:I fetch and pour it on the irisesAnd hope this winter will bring drenching storms.--Timothy Steele
Posted by Catherine Chandler at 12/04/2011 09:04:00 AM