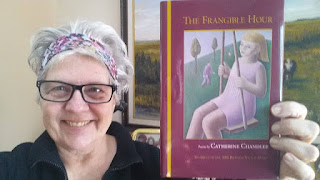 
Thank you to Rob Griffith and The University of Evansville.

As a long-time reader and admirer of the work of Catherine Chandler, I expected great pleasure from The Frangible Hour, and have been delighted to find that all the familiar virtues are present: the effortless mastery of form, the lyricism, the fresh use of nature imagery that appeals to all five senses, the capacity for communication on many levels. But I was wrong not to prepare for surprises. One of the most elegant and haunting series in the book, “Days of Grass,” uses the familiar passage from Psalm 103:15-16— “As for man, his days are like grass. . .”. The effect is biblical.

For her formal excellence and her ease with the minutiae of the natural world, Catherine Chandler is an apt recipient of the Richard Wilbur Award. One feels that these poems have been a long time coming and have been mulled over and revised in the late hours with a true love of the hardest task of the poet’s craft. She excels at short poems and even in the nutshell of the sonnet has made herself the queen of infinite space.

Fans of Catherine Chandler’s earlier work will be delighted to find that she remains at the top of her game in this new collection. Highlights here include the elegies for her mother and her father, and a harrowing sequence of poems about her own daughter’s brush with death. Another gem is “The Ballad of the Picton Castle,” with Laura Gainey in the tragic role of a modern-day Sir Patrick Spens.


Catherine Chandler’s breathtaking The Frangible Hour is the best new collection I've read in a very, very long time. It comprises a lovely coherence woven from disparate strands, not only of subject but of form. The forms display Chandler’s mastery of technique as well as an ear and a heart that demand perfect harmony between what is said and the way it is said. And these are intelligent poems – not stuffy, not showy, but in the way they draw metaphors, similes, and images from far away, or seemingly far away, to bring clarity to the muddled complexities of life. They lead us, challenge us, and finally reward us with moments that become nothing less than new words, a vocabulary that enlarges us.


Catherine Chandler’s poems radiate a wisdom that earns the reader’s trust, both intellectually and emotionally. But it’s her words that make her a marvelous poet: “The hours buckle, folding into pleats,” says one poem. A sonnet, with a light opening to a darkening story, describes neighbors as the “misnamed Grayces”. And don’t expect this collection to be somber. Take, for instance, “Reunion Muzak”: I wish I could copy it here – because the only way to really give The Frangible Hour enough credit is to use Chandler’s own words.